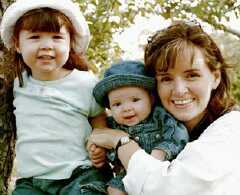 Tina became our second Pediatric Nurse Practitioner in early 1995, shortly after graduating from the Master’s Nursing Program at Northeastern University. Much of her PNP training was done at Children’s Hospital – Boston, where she had previously been a staff nurse on the inpatient orthopedic and pediatric surgical wards for many years. Tina lives at her dog Nellie’s house in Franklin with her husband (an elementary school teacher) and three children. Tina was the very first PNP who is not a full-time hospital employee ever to be granted inpatient privileges by Children’s Hospital! Like Marnie, Tina was also actively involved as a Clinical Care Coordinator in the PACC project and continues to function in this role for many of our most complicated patients.